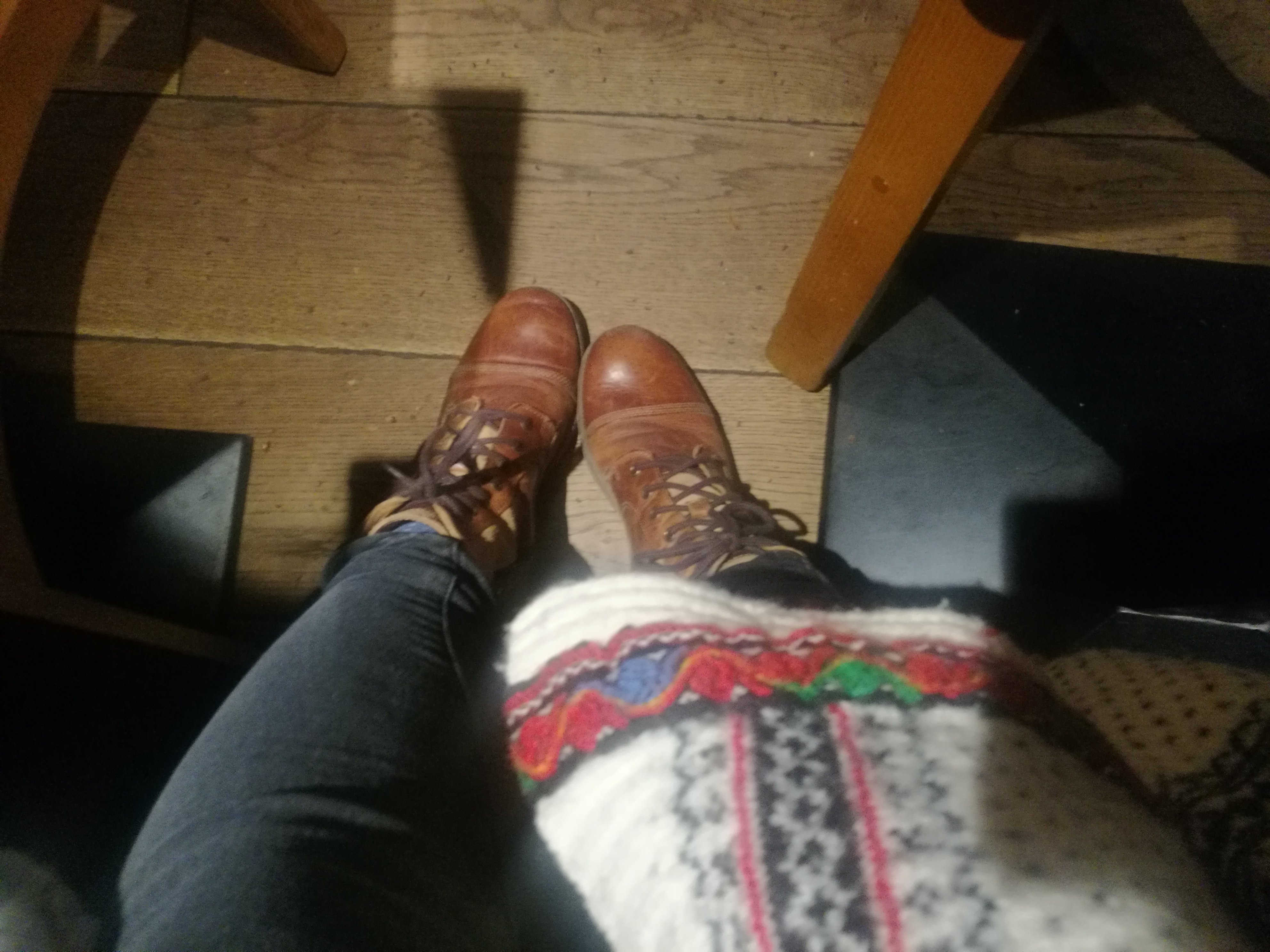 Yesterday evening I had a WTF?! experience of completely outrageous proportions. I was mistaken for a prostitute.

Now, you probably thinking that I was wearing my usual miniskirts, high heels and maybe my oh-so-cool black hat (which would be no excuse!). But right there and then, I was wearing flat leather boots one size to large, former-black jeans – washed-out because they’re old not cool, a “Devotchka” band t-shirt (indeed Russian for “woman/girl”, but who speaks Russian in Dublin?), a thick wool sweater my mother knitted and a dark-pink all-weather Jack Wolfskin jacket designed for a life outdoors.

There was absolutely nothing sexy about my outfit what-so-ever. With the exception of still wearing the morning application of make-up and not carrying a basket, I looked like I was on my way to go mushroom picking in the woods. It stood in shocking contrast to the trio of women sitting next to me, boobs almost falling out of cleavages competing with the Mariana trench, heels like sharpened pencils and bare legs protruding from skirts no longer than napkins (you go girls!). And yet I was later informed that five Swiss men were debating amongst themselves that I with definitive certainty must be a prostitute. Like, what the actual fuck…?!

But lets backtrace. This is one of those situations that I believe needs context, if not for you to understand, but for me to get my frustration out.

Yesterday I arrived to Dublin late on the Saturday evening and after checking in to my hostel I was on the hunt for a late dinner snack. Hearing live music I got intrigued and entered the pub to grab a Guinness, to listen for a while and maybe strike up a conversation with a random stranger – I’m in Dublin after all.

So I listened to the music for a bit, scouted the room for someone interesting and interested to talk to and I noticed a bunch of guys regularly peeking at me. I figured they were as good as any to talk to and I strike up a conversation with one of them about the music. It’s not a very profound conversation, covering the usual nonsense you always start with but never remember in the end. We joined his friends who are a mix of “I don’t want to talk to you” and ultra friendly. I made nothing of it. It is common place that some people will be more interested in your company than others.

They told me they were colleagues from Switzerland working in “something pharmaceutical”. Some of them struggled to speak English so occasionally I switched to German with them. My language skills fascinated them so I told them a short version of who I am. And as on many prior occasions they too didn’t believe I was from Sweden as I’m not blonde. I told them it’s not my problem if they don’t believe me, it’s theirs, but when I pay for my drink my driver’s licence is by accident on display and it proved me right.

They are pretty drunk, some more obviously so than others, and as some of them get up to leave I ask why, not really caring but also not wanting to be left with the drunkest. One of them responded with a nasty smirk that “two is enough for you.” I am taken aback as it’s a pretty crude comment if interpreted in the only way I could imagine, and surprising as I had made no sexual advances towards any of them. I was on very good behaviour. Indeed, I had been actively, as I had no interest and were feeling pretty awkward of it, avoided the physical advances from the most drunk of them and instead spoken with genuine fascination that there was a “Cassidy the Vampire from Dublin” lookalike from the tv-series Preacher sitting at the bar.

Sometime after I with intense amazement had told the Cassidy lookalike he looks like a dead blood-sucking monster – probably shocking him half to death and completing the comparison, the guy I initially had talked to told me how the group of Swiss guys had been looking at me and arguing amongst themselves regarding the certainty that I was a prostitute.

I was in shock. I had looked down at my clothes and with utter disbelief proclaimed: “dressed like this?!” He argued it was my behaviour that made his friends think so. That it was my cool confidence, my happy-go-lucky and I-will-be-a-friend-with-anyone-for-a-few-hours that set them of. Most likely it was much simpler than that: a woman alone in a bar is by definition perceived as a prostitute, regardless of what purpose she has to be on her own.

While Switzerland is notorious for not being particularly progressive in terms of gender roles, this extremity in assuming that free spirited, strong and independent women are prostitutes is really a very sad conclusion to draw. Sad not just for me, nor for women all over the world but especially for them. Poor fellows, if they only knew all the independent activities myself and so many other women are up to, I am sure their little world would crumble to pieces.

Being increasingly frustrated at the situation, and as the two remaining guys kept hitting on me, one slightly more eloquently and one less so, I simply told them I was a lesbian. It’s a cheap trick to get rid of unwanted male attention without dealing with the whole hurt-male-ego issue… and I hate that I did. But I was shocked and growingly appalled so I just didn’t want to deal with the “I’m telling you, women can be independent solo travellers, straight, strike up friendly conversations with random people (of either gender) and NOT be interested in anything sexual with them and no, I don’t care that if my rejection hurts you ego”- conversation… yet again.

The evening ended as I somehow got involved in the break-up of a couple in which the guy was not comprehending that, as a consequence of being unfaithful, he was being dumped. The girl told me repeatedly that I saved her from the horrible situation and that it was nice to have some support in telling the guy to get a grip. It was a refreshing contrast to be reminded that being independent enough to be able to do things alone and to be brave enough to strike up both fun and necessary conversations with strangers has it’s definite benefits.