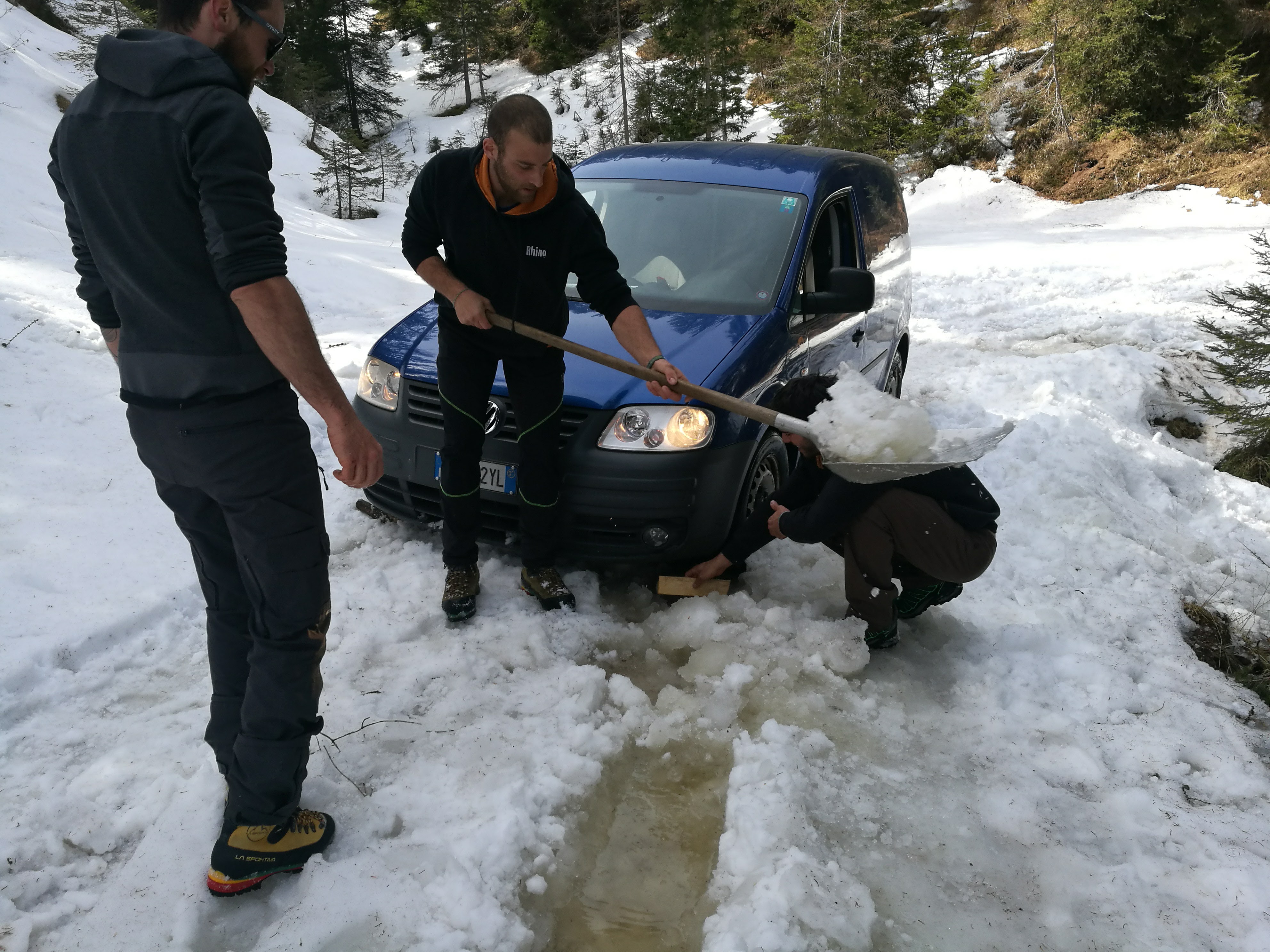 Tucked in between an overpriced ski resort and the hills and valleys of the Dolomites, there were five of us: myself, a car and three arborists. I was down with a minor flu, the car was jammed one foot deep in snow slush and my companions were armed with one shovel, a random assortment of firewood logs and whatever manpower God given them. In some sort of Swede-in-Italy irony, part amused and part “it figures”  I ran around picking branches from the ground to offer up as sacrifice for the spinning wheels. Before all the humour of the situation had died, the car eventually started rolling to the soundtrack of a racing engine, the smell of burnt wood and my friend Monkeybear’s fingers bleeding all over the snow.

One hike later, not only us but the car loaded with firewood, food and alcohol, a generator and bucket loads of water, arrived at the little cabin in the middle of the woods. A few hours later a bbq party was running wild with 20+ to me strangers and for every shot I endured I might not have become more fun, but at least I got “less sick” and as the music started pumping through a half-decent sounds system I made sure I belonged to the last crew keeping the floorboards in steady vibrations. A few hours later still and most of us laid crawled up in sleeping bags under the table or packed as sardines.

The morning after, I repeatedly got the question: how are you feeling? As I was not feeling in any particularly bad way, not like the girl who refused to take of her sunglasses, or the bunch mostly observing the rest of us as we cleaned up the place, I was forced to acknowledge that I probably looked like sh*t.

As I sat there in a scenario with people who either didn’t know me at all, or only knew me from a very limited time and context, I could not help but start thinking about how other people perceive us. Monkeybear told me that he perceive me as a socially awkward and shy person. Monkeybear‘s friends thought me the crazy party girl. I myself feel I don’t belong in any of these categories. Friends has called me too-wild-for-most, honest-bordering-on-cruelty, in-need-of-a-dragon and that guy said I was “complicated”. I’m described as funny and happy, yet simultaneously melancholy and “grumpy” (as Don Quijote calls me on regular intervals). I myself feel I don’t belong in any of these categories. This experience with other people’s views on you creates the feeling of a patched facade from the outside and like an all-week’s-leftovers-Sunday-buffet on the inside. Not necessarily unappetising, but a tablespoon of Tuesday lasagne does not go well with two Wednesday maki-rolls and Friday’s chili con carne.

Naturally, ever so often we undergo changes in our lives, as should be, but I can’t help wondering, or fearing, that maybe all we are in each context is the reflection of what other people wants to see in us. This being one of the reasons statements such as “I believe in you” really do seems to have an impact on our behaviour and our wellbeing.

In philosophy there is a research field of essentialism. A study on the core of things, events and people. It fascinates me immensely as I always believed that there must be something more to “being” than simply taking up space, breathing, smelling in a particular way, laughing and going bungy jumping.

One thing that should be stated though is that it should not really matter what other people think of us, but what others see might. While limited, it is a more honest representation of how we behave. If you “feel misunderstood” this is most likely your own incapacity to display yourself to gain the desired effect. Like, if people think you an arsehole, it does not matter if you see an angel in the mirror. In light of this undeniable truth I keep wondering to myself who of the different personalities others see in me, I myself feel most comfortable embodying. An more important still, which of these personalities will gain me whatever desired effect I long for.