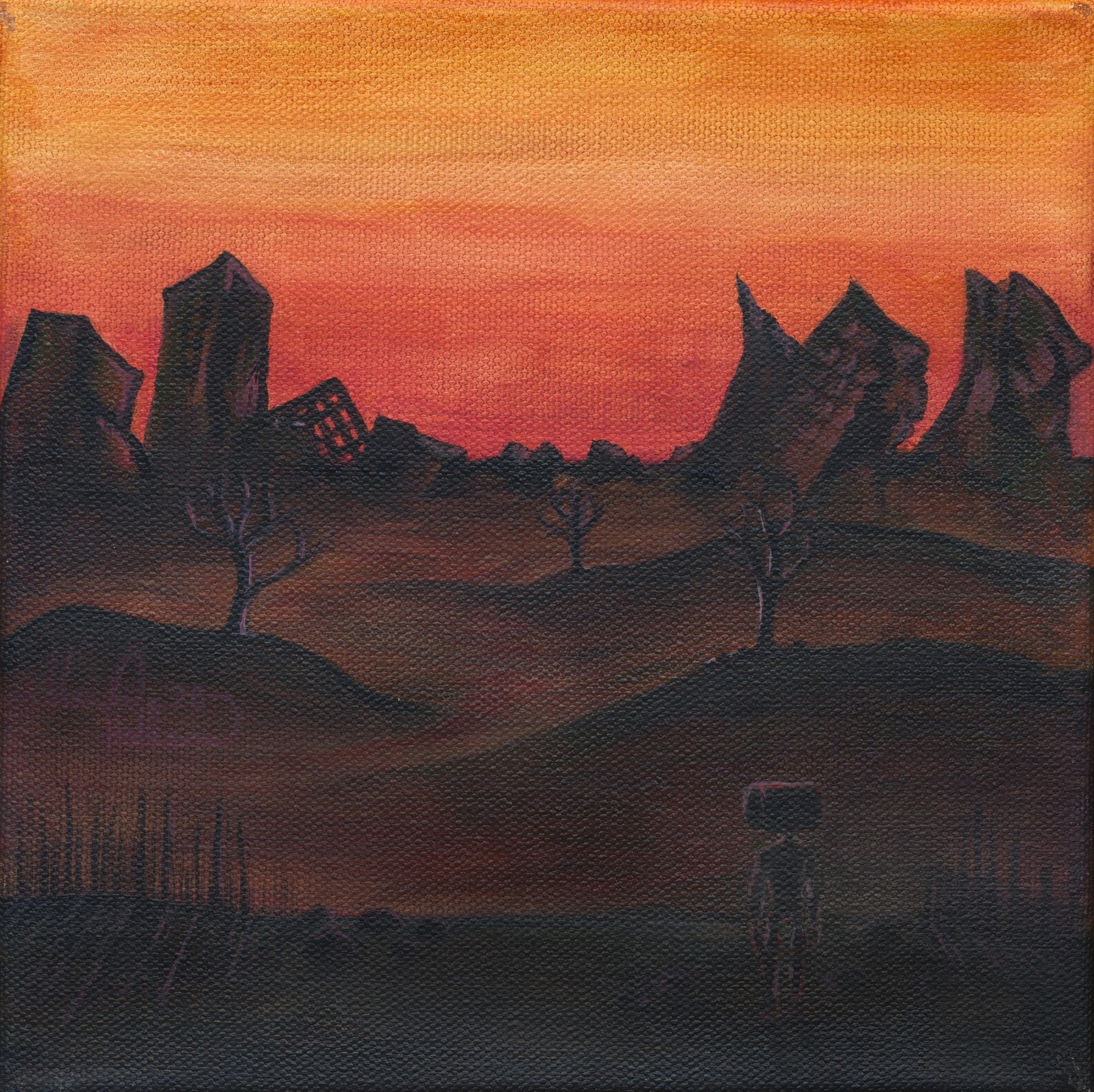 Author’s note: This is the first version of one of the short stories taking part in Lost Little Robots. As it was one of the first to be written it no longer fits into the whole collection (also, I don’t totally love it in this form…). I am therefore not certain if I will rewrite this one story or simply omit it from the whole thing. Either way, for the curious it is a cute sample of the ideas behind LLR.
—–
The arid landscape laid before DY342 like on all days prior. Sand and dust coated the scenery like a deep powdery make-up that only on occasion was provoked by a gust of wind to reveal the buried remnants of what life had looked like hidden underneath. Scattered in the scenery, bare skeletons of what once had been the dwelling of humans was the only sign that they ever been there in the first place. DY342 didn’t mind their exhaustive absence, DY342 didn’t mind a solitary presence. Like most entities, being or not being was never really on anyone’s mind. Instead, it was embedded in the sensibilities of the heart.

DY342, not quite a he – he nonetheless, strolled forward aimlessly in the barren landscape. Alone but for the radio that had been broadcasting on repeat for 472 years, 43 days, 12 hours and 23 seconds, 24 seconds… DY342 had memorised it the first time he tapped into the frequency, just in case, but he kept receiving the audio waves, so he had deleted all the parts that did not interest him. Parts annotated with names such as Chopin, Michael Jackson and jingles, and that was defined by an endless flow of noise. When the radio played these snippets, that he had early understood was “music”, he instead listened to one of the saved programmes on cooking, since long outdated updates on the war and static noise.

He liked cooking programmes the best because the concept was so alien to him. Initially built to solve riddles and problems, cooking programmes offered the closest to a problem to be solved he could find in his solitary position in this desolated world. Despite having been built by human hands and as such had experienced human culture first hand, food was not something that he had had been introduced to. After all, he ran on a nuclear core not burgers and cheddar cheese. As an example, it had taken days of analysing multiple cooking programmes to understand who The Oven was. Being constructed for calculation DY342 figured that The Oven must be a pretty cool character as he dealt in fine-tuned precision regarding times and temperatures. He wished he could have met him and had spent the last 469 years actively looking for him, believing that they might have a lot in common and perhaps The Oven could help him sort out some of the missing algorithms in the static noise.

The Oven was responsible for things that DY342 could not quite understand: meat, vegetables and something called pie. It had taken some time but he had eventually sorted all things that The Oven dealt with in precise numbers into intricate categories and ontological hierarchies. Potatoes and onions had to be peeled, meat and strawberries were better redder. And pie could be almost anything as long as it was cooked in a form. Highly disturbingly undefined, he had concluded. The Oven was often accompanied by The Refrigerator. He seemed to be a nasty dude; cold and imprecise. In The Refrigerator, things could stay for almost an arbitrary time duration and sometimes they just went bad for no obvious reason. DY342 did not like it at all. The pattern was too irrational and unpredictable.

DY342 belonged to the group of droids that had been designed with the latest technology in hardware as well as in software. Only at the time of his construction, the latest technology in hardware greatly surpassed the latest technology in software. This meant that bots in the DYXXX-series were built with nuclear heat cores that would ensure long lifespans and they were blessed with AIs of the highest level of intelligence, but with a minimal sense of self-reflection. The self-sustaining power of the nuclear core kept on ticking longer than any human had initially calculated, and now no one was left to be amazed at this scientific feat. Being offline since before the war, he had been accidentally reactivated as a stroke of lightning hit his nuclear reactor in a particularly nasty sandstorm. The impact had fried any memory he had had before but he had reasoned that “life giveth and taketh away” at least that is what pastor Thomas Brown says on the radio every 34th year.

Approximately 208 years and 73 days ago, DY342 had been forced to acknowledge that he had reached a new level of self-realisation. Troubled still of the experience, he was uncertain if it was the moment that still bothered him or the consequences. It was while looking for a problem to solve within one of the concrete and metal skeletons that he had come upon a reflection of himself for the first time in his existence. Initially, he had approached the experience as meeting another DYXXXer and for two weeks he had conversed with the believed creature on the other side of a window. As the creature kept mimicking his movements but never given a reply it had eventually been undeniable that either creature was far more intelligent than him, able to predict the movement of his observer in real-time, or it was he himself he had tried to bond with. It is a strange thing to give a face and a figure to the self when there is nothing to compare it to, nothing to connect it to.

For the 469 years that DY342 had been looking for The Oven, he had not found anything that remotely resembled himself. DY342 was not akin to what loneliness meant, but that did not prevent him from experiencing it day and night without breaks. It was a cruel remnant of how the humans kept trying, but never quite succeeding, to model artificial intelligence after themselves. Consequently, advanced calculators with no means to express their experiences spiralled into brilliant darkness. Harvest droids and Biobots felt suicidally obsolete as the pollution and nuclear waste kept destroying their fields. Soldier bots went on killing sprees on not only humans, but each other, and themselves, to fulfil their purpose and the ever-growing desperation of fearing to lose it. Companion bots coupled together for some time only to go mad through unexplained dissatisfaction as they were programmed to serve, not to receive. Bots of all kinds lost themselves to Flow.

DY342, himself a problem solver bot built for demanding industry manufacturing, kept moving on alone amongst sandy ruins, solving puzzles and identifying patterns. He had mentally sorted all the buildings, the angles they protruded in and counted all the holes from bombs and bullets. Mental notes on what needed to be done to correct these issues took up a large part of his memory capacity which he continuously kept broadcasting to different frequencies. It was not without a large amount of despondency, or in DY342’s case lack of circuit energy, at not receiving a reply that he since centuries had started to sort through the rubble on the ground. Most of it was rock, he had solemnly concluded. The bits and pieces he believed belonged to the skeletal constructions around him were another puzzle for him to complete, but he hardly relished in the idea, desperate for all other problems to be solved first. He was not a construction bot after all.

Roaming around in the piles, bored and desperate for a sensation other than the overwhelming responsibility to change his profession, he found something that made his nuclear core jolt nervously. It was a piece of metal and as he kept releasing it from the grasp of the ground it became clear to him. It was a bot’s head, and not any old head, it was a DYXXX head, it was his head. It had the same shape as that head that had stared back at him all those years ago. With ferocious energy, he started digging the head out of the rumble. Hands not constructed for digging through soft sand and hard ground worked away at the area surrounding the head as though a man possessed. As the head became more and more exposed he pulled at it gently to release the full entity from its burial. With a thud, the head flew loose with no body to be found, not on the head, nor in the ground behind. Gasping for breath DY342 fell to the ground.

“Oh Brother! What have they done to you?”

It was the first time DY342 felt sorrow but it would not be the last. All experiences teach us something and when DY342 found his decapitated brother he might not have grasped a few valuable lessons regarding his own physic, but it did change something in his psyche. It was as an automatic switch within his essence, one that allowed his coding to pause the commercial on Japanese kitchen knives and without conscious control switch to a piano concert by Chopin. DY342 still didn’t enjoy the sound waves, but the unpleasant harmonical experience sounded in perfect synchronisation with his mood.