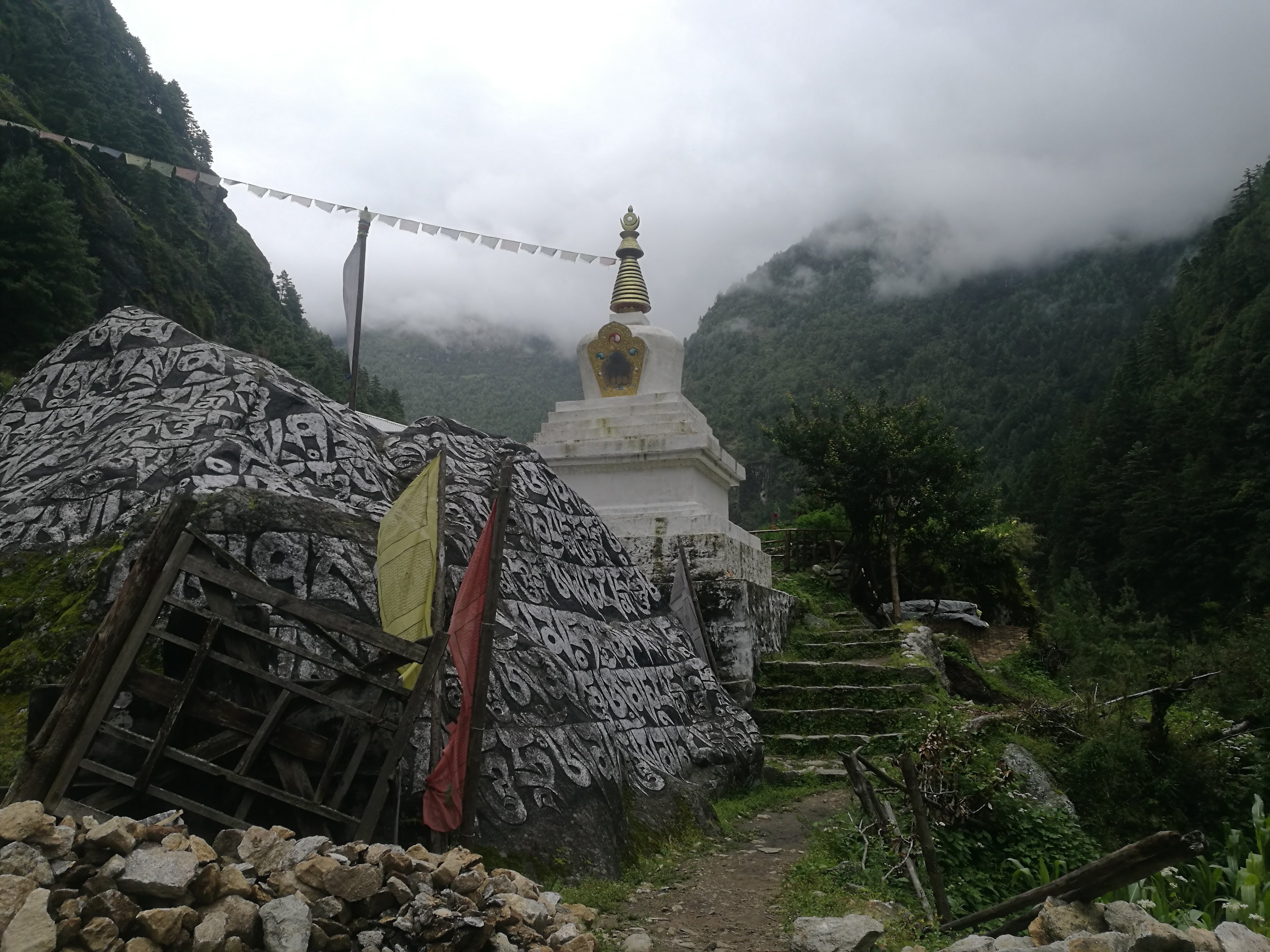 –Desperate to catch a break, the only break I seem to catch is that which breaks me in two. —

I woke up to dreams of Mt. Everest. In my nocturnal delusion Dexter had, to my surprise, decided that I too should get to reach our destination. Together we hiked the hills once more, this time with little to no effort, it was a dream after all, quickly arriving at the destination I that had eluded me in waking hours. Despite the fictive nature of the experience, it returned me to when me and Dexter did go up and down the Himalayan hills. As most experiences it was a journey of ups and downs, both in the literal sense and the one that isn’t.

My dreams of heading to Nepal was motivated with a burning desire to catch a break from life as I know it. To do this I had decided that I would be hiking in Nepal without a guide – whinging it Puzzle Pieces style. Then when we first met, Dexter quickly convinced himself to join me. In return, I quickly convinced myself that I would join him to Everest Base Camp. He promised to carry my water and, well… who could resist a handsome fellow who offers to carry your stuff up a hill? After a few months of solitude, and a couple of beers, it seemed like a pretty sweet deal with close company.

We proceeded to get our permits, tickets and gear, and a few days later the two of us were packed like sardines in a jeep together with nine locals. It was a 13 hour long, bumpy torture of a ride set to the never-ending soundtrack of Nepalese pop music. Sharing, Dexter told some of his delayed truths and so that evening ended.

The next day we moved out, heading into nature. Excited we hiked up and down the mountains, each one a challenge, each one a victory. Getting the feel for what was to come. The trek was beautiful. So beautiful. The clouds were kissing the hills as they made their slow decent into the valleys below. In the humid forests our advancement was made on muddy forest paths, climbing stairs made from big rocks and crossing Tibetan bridges. For each step, for each bruise and muscle ache, the closer I felt to myself. And further away from everything else. Untouched nature, the face of God, and I worshipped: each drop of sweat – a sacrifice, each heartbeat – a love song, each aching muscle – a prayer. Pure happiness in spite of it all.

Starring into the face of God humbled me. The deeper I went, the closer we got, the more emotional I felt. As my body grew increasingly exhausted my mind was left to fend for itself unprotected. Yet between the tired tears I hid, I was again reminded that my problems are nothing in this world. That whatever life throws at me is a lesson to teach me a new truth, either my own or someone else’s. A lesson to which either harden and fight, or to soften and forgive.

The challenge of the mountain may have left my body sore, but growing inside my lungs was a bigger problem. I was getting ill. Rapidly. And my body started to violently object to the climbs not due to the elevation nor to exhaustion, but to the ever growing opposition on the inside. Half dead, I slept for two days. Dexter was worried, but we both knew he had to and would continue. Everest was his childhood dream, and promises had been made. I was a stranger, just a someone he had a couple of beers with once.

A few days later I slowly made my walk of shame back towards civilization, turning my back on my goal to reach Everest Base Camp. It was bitter to fail. But I reminded myself repeatedly how grateful I was for all the beauty I had already experienced.

Hiking back might been one of the hardest thing I have done in my life. Half dead in bronchitis I could hardly breath as I walked up and down the hills fuelled exclusively by my own determination. Every step was a painful reminder of how far it was to the closest doctor and against my better judgement I munched on whatever pills the people who took pity on me offered in the meantime. Sick to death it felt reasonable to reject the Sherpa hotels’ cold showers, so I stayed dirty and did not only feel like I was dying, I smelled like I died a long time ago. My personality weakened to such a degree that I even let a Sicilian man carry my bag up a hill, simply not strong enough to object. (You will probably never find these words, but know that I am forever grateful.) At some point I even dead-serious called out to the heavens to just give me a heart attack, physically not able to do any more vertical walking.

Sometime short of a week later, after a quick visit to a doctor who gave me some more random pills, I defeated the final climb and I walked into the tiny town of Lukla. It is famous as it is blessed with one of the world’s most dangerous airports, my then most recent destination. Walking on the city’s one street I was surrounded by “life” for the first time in many days and posters on the “Irish” pub displayed massive cheeseburgers which made my stomach twirl. Yet, still too tired to bother, I ended up buying a samosa from a random open window. It was cold and soggy and the best thing I had eaten in days.

The next day I was told that the aeroplane comes when it comes, if it comes. The clouds laid heavy on the surrounding mountain tops and the runway was barely long enough for the most optimal of scenarios. From six to about noon, I ate cookies and discussed life with couple of Australians, immensely grateful that the random pills had started to work, incredibly conscious that I had not showered for weeks. Then through the most absurd flight experience of my life, we were in a panic rushed through the airport security, through a waiting room and onto an aeroplane with a still running engine almost simultaneously as the previous passengers got off. I had barely manage to sit down when the flight was already heading down the runway straight towards one of the mountains. For the first time in my life, I actually held on in the shaky aeroplane while thinking that it is such a cruel twist of fate for God to kill me after I survived all the hills.