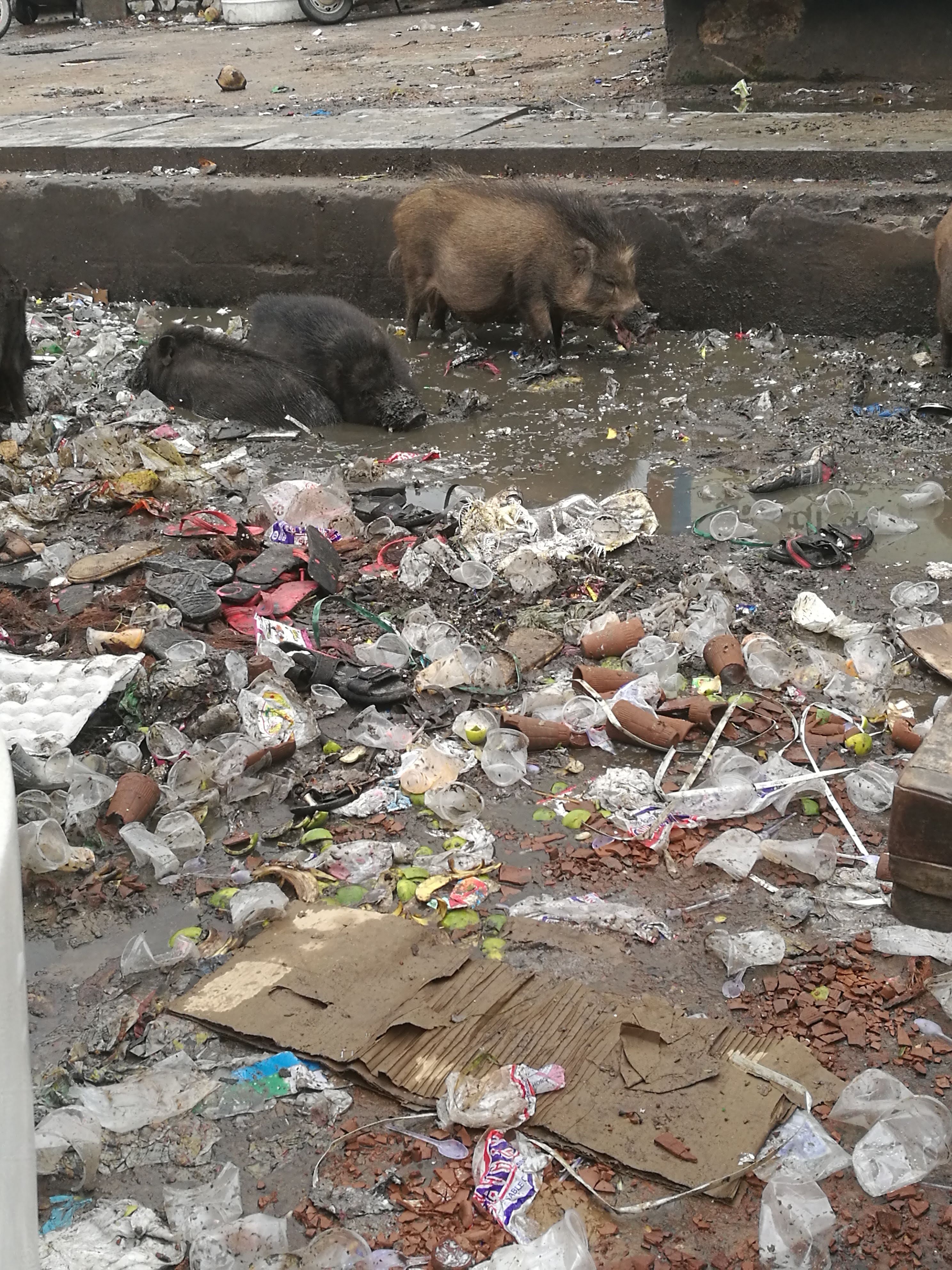 It stinks. And not in some metaphorical “it is a bad place” but in the most brutal of literal senses. It smells really bad. Absolutely everywhere. Spice bowls and burning incense are randomly placed at every corner intended to hide some of it. Fun fact: it doesn’t work. Instead the streets are filled with the pungent smells of rotting garbage, putrefying puddles, cow dung, spicy street food, decomposing animal corpses and human waste. In lack of a better word, the smells are pretty remarkable.

Now, I am really no princess. I am fine to roll up my sleeves and get dirty. I think what bothers me most is that the smell has a source, a source with a consequence and a consequence that is not very healthy for people, nor for the animals on the loose and definitely not for the environment.

Garbage is everywhere. There are piles of plastic waste even in the most trafficked of places, in wild nature and under your feet. The wild animals feed on it. In the bigger cities the starving, “holy” cows feed on it, die from it. Dogs run around filthy, broken and sick. Almost each one with a skin disease or a broken leg. Yet they fight over their dinner: wet cardboard boxes, fruit peels and faeces. It makes me sick. The Hindu hypocrisy right there. The holy animals not to be eaten, but throwing rocks at them and leaving them to feast on human filth simply to clean up the streets are no problems. It is irresponsible, it is appalling and beneath the dignity of nature. It should be beneath the dignity of human nature as well. I guess it isn’t. Two conversations come to mind. The one in which a man happily tries to convince me it is actually pretty good by telling me that the cow are first to get the baked roti (bread). He seems to not comprehend why when I tell him that bread is no food for cows, they should eat grass. A similar conversation concerned how dogs should not live on exclusively vegetarian food.

But there are the contradictions to the horrors the nature face. Those few amazing people who go to great lengths to help the wild animals. Organisations working on the sterilisation of wild dogs and a government that banned plastic bags and plates, and “tries”. But with a nation of billions where millions are simply fighting for survival, what can you really hope to achieve with regulations far beyond the average Joe’s concerns?

As a provocative contrast, India is also amazingly beautiful. Centuries of gathered riches and wealth tower over the mess in the cities’ growing middle class. Majestic palaces and forts, temples and mosques with the most intricate of artistic details. Exquisite hand carved stone-details on each of the walls of enormous forts. Fantastic flower mosaics in marble on the mosques. Hindu temples with painted walls and handmade sculptures covered in flowers, milk and rice. Not to mention the fascinating array of building styles that come as a consequence of invasions and occupations. The beauty also stretches to the food which is almost always amazing, only when it isn’t. Delhi-belly hits regularly and the facilities does not inspire much. I guess that’s why the streets smell like they do.

Having left India and continued on my trip. I am frankly not sure what my take away message from India was. I was told it was a place that you either love or hate, but I feel neither sentiment, both feelings too strong for a place with such extreme contradictions. I had a wonderful time, no doubt about it. Will I return? Not in the near future.