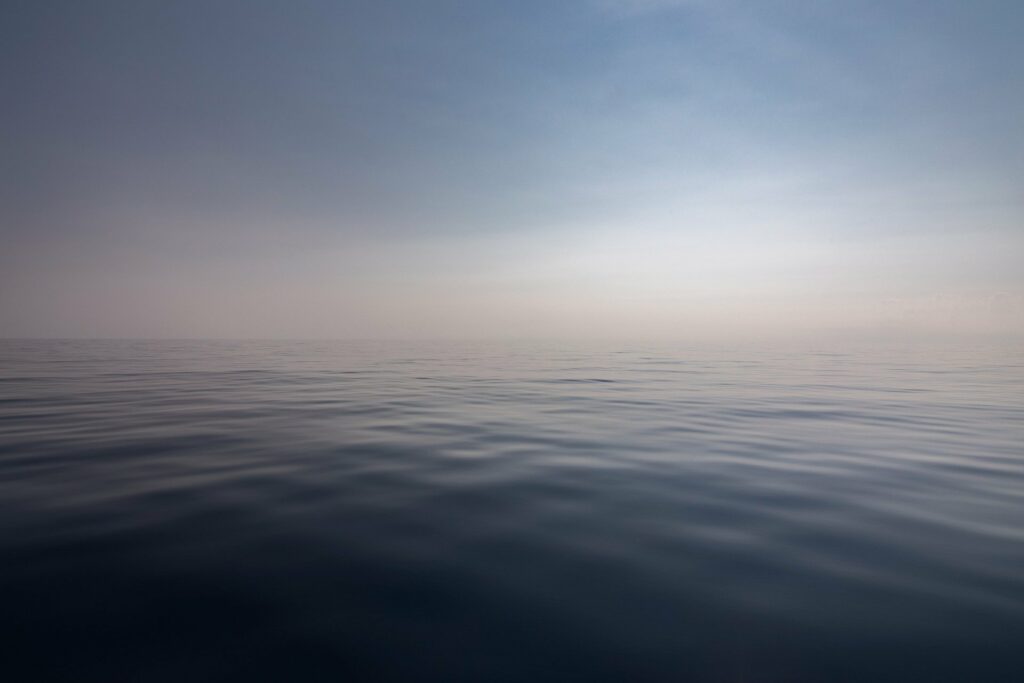 In the middle of some ocean somewhere forgotten, there is a train station. The wet landscape surrounds the waiting hall and its seven platforms are only just so slightly raised above a water surface that hides the iron tracks beneath. It is beautiful in its isolation. Striking in its lack of purpose. Alluring in the violation of its functionality. Once this was a place for arrival and departure. All that remains is the trip.

To uphold the natural order of things, the rules of the universe, trains still come and go. What is a train station without a train? And what is a train without a passenger? The large locomotives cut through the water and the snake-like creature leave a temporary wound in its path that never leaves a scar. Its arrival a distortion in the fabric of space, but not in time.

Passengers are rare, but the ones that are there, are so to catch the trains that don’t go anywhere. In an isolated world, the trains take the passengers around and around. And in an isolated world, only the isolated arrive. Isolated not from land nor merged into the ocean, but turned half-spirit. With half a heart still in the mortal realm, the other half forwent into a consenting surrender. The train station is no last destination, but it is a permanent transition hall.

Circling around on tracks submerged under the surface, the trains offer their passengers a strange sort of release from existence. The travel is effortless. It is pointless. It is peaceful. There is no destination. There are no obligations. There is only you and the movement. The train takes you nowhere and no one is expecting you to arrive.

Inside the cabin, the water reflects the light from suns and moons and stars on the outside. In mesmerising patterns, it’s reflected on the cabin ceiling offering a trancelike surrender to those who rock to the trains steady beat. During rain and thunder, the sound sings a lullaby as each drop falls heavy on the metal roof. The rocking movement on the rails sends even the insomniac into a state of utter relaxation. The train station is a place for peace. It is not a place to die, it is a place to rest.

I’ve been at the train station since long before the water rose, back when the station was a refuge in a lonesome desert. I don’t recall why I came, but I know why I never left. There is simply nowhere to go.

Sitting in the waiting hall, I sometimes grab a coke or a bag of chips from the vending machine that never empty. I sometimes have a quick chat with the old lady that sells tickets. Sitting inside a small glassed compartment no larger than a phone boot, she’s smoking long cigarettes which glow never go out. It’s near impossible to see her through the collected smoke of the never-ending supply of cigarettes, but her purple cat-eye glasses reveal that she never goes anywhere else. She’s neither friendly nor talkative. Our conversations concern the weather, the fading paint on the walls and when the next train comes. “The train arrives when it does,” she always replies, stamps my tickets, hands it over and lights another cigarette. And then the conversation is over and I go sit among the other few passengers.

You would think we knew each other better by now. But we don’t. Amongst the anonymous strangers that come and go with the trains, a few faces are hard not to notice.

There’s a bald man in an ill-fitted suit and a briefcase he never let’s go off. Ever so often he looks on his wristwatch, taps it frustratedly and sighs. All I know about it him came from that one time he told the lady at the counter that he was late for work and needed to catch the next train as fast as possible. Like with all times, the purple cat-eye glasses in the cigarette fog had stamped a ticket, handed it to him, and told him that the train will arrive when it does; and that had been that.

Then there is the woman in the trenchcoat. The bruises on her wrists never fade and the scarf she has wrapped around her neck barely hides the marks of larger hands than hers. She wears sunglasses when the sun is out, and when it isn’t. On the trains she relaxes, dreaming herself away to a destination she’ll never reach, but in the waiting hall, there is an air of fear around her, constantly looking over her shoulder.

The man that never said anything whatsoever is dressed in a military uniform. With blank stares, he looks at the nothingness that is in front of him. He never buys a ticket. He never gets on a train. He never leaves. With death written on his face, he sits in the waiting hall, blankly staring at the wall in front of him.

Only once, did I ask myself why I was there with these people. Why I was there at the desert train station, at the ocean train station. I was not the first one to arrive, nor was I the last. But at that moment when I entered and asked for that first ticket, it was as though I knew I would never leave. For a fraction of a second, I had wondered why and looked at my travel companions questioningly as though seeking some form of companionship, a common feature to determine what we all were doing there. But then I had gotten myself a coke from the vending machine, had sat down in the waiting room and had never questioned it again.

The next train arrives when it does. Waiting for it, I am looking out over the water surface asking myself how far it stretches, how deep it goes. The trains never go anywhere, but sometimes the passengers do.