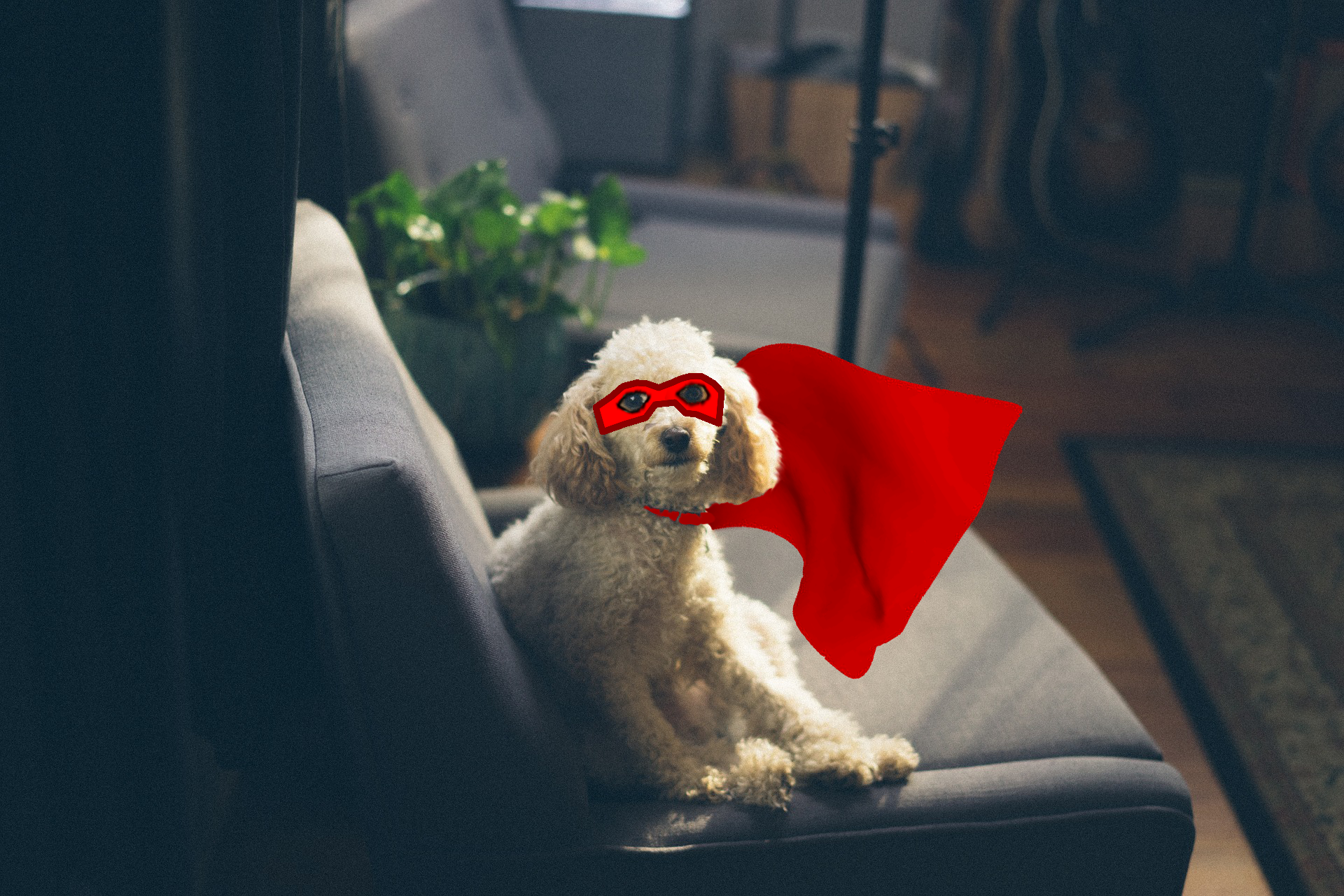 … or how Mr Fluffball went to battle against the monster squares

Mama Anne, Papa John, teenage daughter Becky and the twin little brothers Thomas and Jake, and himself Mr Fluffball, the family’s dog. They were what anyone would describe as a white, upper-middle class family somewhere in suburbia. As far as anyone could tell they were happy, going about their daily lives as any other normal family.

Only, Mr Fluffball knew better. His family had been hijacked by a bunch of small, square monsters. Slowly they sucked the happiness out of the people he loved. He knew he had to do something.

Years ago, Mama Anne had started posting her baking creations on Facebook. While the family always happily ate Anne’s cakes or pies, no one knew, that she was no longer baking for them. She baked for thumbs up. She had taken her cooking skills to new heights. Instead of simple apple pie, her creations had turned into Italian apple roses. Her chocolate pudding had become French chocolate mousse with Caramel crust. And cake was no longer one tier, but several. Tall and pretty, the desserts were mind blowing. Far more than what anyone could be expected to do at home in the late hours after work.

Had anyone in the family been paying attention, they would have realised that the number of hours spent in the kitchen to produce these spectacular desserts had stolen time from helping with homework, family hangouts and strolls in the park.

Luckily for Anne, no one was paying attention. Papa John had been engaged in a political rally on Twitter for the past few years. If he spoke up at dinner, he was proclaiming how he could see the next dawn of politics just around the corner. His declaration regarding property taxes had been re-tweeted twenty times in the past hour. It’s a revolution! he happily announced in between pot roast and double checking if the tweet had gotten any comments in the last 43 seconds.

At the same dinner table, Becky was in a Snapchat conversation on how lame parents were and, simultaneously on Messenger, how much she loved Harry from One Direction.

On the other side of the table, Thomas and Jake were watching a Youtube video of a bunch of people falling off roofs. They were laughing wholeheartedly. Mr Fluffball was convinced that at least the youngest could be saved from the soul-sucking invasion.

In truth, he had been watching the slow downfall of the family for the past 8 years. In a strange series of events, the independence and willpower of each family member had been swallowed up by small, square creatures that appeared desperate for attention at all times. The creatures bleeped and blinked and the family was very quick to satisfy the monsters’ cry for help. Mr Fluffball remembered when Thomas and Jake had appeared into the house. It had been the most attention the family had given anything, but then these creatures had infiltrated their fortress and there wasn’t a moment when the monsters were not nearby.

Despite being a dog, Mr Fluffball was no idiot. He understood that the family was miserable prisoners to these monsters and he had every intention of rescuing them. Analysing the situation, Mr Fluffball had first approached the problem in a seemingly straightforward manner.

First, he had insisted on walks, then (fruitlessly) longer walks, then brought them sticks and balls to throw him, then begged for food, then for attention. It had been going on for months, maybe years. Mr Fluffball’s time perspective was that of a dog, meaning that time didn’t mean much. And he was running out of ideas.

At some point, he decided on a more aggressive approach. He tried to tear down the curtains, get his tail stuck in the vacuum cleaner, (a rather painful experience, he recalled), and numerous times he had simply released himself inside the house hoping someone would take him outside to play with him. All of these heroic attempts had been treated as though he was the villain. The family had yelled at him, pushed him away and thrown him outside in the backyard.

Heartbroken, he acknowledged that none of his efforts were making any difference. Initially, he had made the assumption that the family simply did not love him anymore. And it had pushed him into a dogpression. But his bred nature was to love humans, he could not let go of his family: They needed him. He was the hero who had to save them from the square little monsters that had infected his house.

He realised that if he could not open the family’s eyes, he had to kill the intruders directly.

One evening after dinner when the family was eating their German Schwartzwalder cake (confirmed with 143 thumbs up) he took matters in his own paws. Sneaking under the table, he snuck around the corner into the hallway, to the mother of the little squares. He knew this was the source of all evil, as the family occasionally pushed its blinking buttons on regular intervals as to “boost” the life of the little squares. Like a massive, horned spider with legs protruding from all directions and into the wall it rested on a little table.

Scouting the area, Mr Fluffball took a big bite of the creature and tossed and turned while biting firmly down onto it, ignoring the jolt inside his jaw. As he let go of it, and spat it out on the floor, its legs ripped to shreds, the silence in the kitchen turned into a full-scale ruckus.

Yeees! I did it! Mr Fluffball thought, The monsters are dead!

The family came running and while they were yelling “bad dog!” at him, he had done it. He had killed the mother monster. If being the villain was the price to pay for saving his family, he was okay with it. He knew better. He was their hero. He had rescued them.

After a few moments, Papa John had cleaned up the mess around the Router. Still angry at Mr Fluffball he returned to the kitchen with the dog at his heels.

He proceeded to pick up his phone and connected to the mobile network and wrote a response on one of his biggest political opponents on the Internet.

Mr Fluffball sank to the floor, looking defeated. He was already plotting his next move.

[Authors note: I write to improve. If you enjoyed a piece of text — I would love to hear it. And if you absolutely hated something — then I am even more eager to learn about it!]