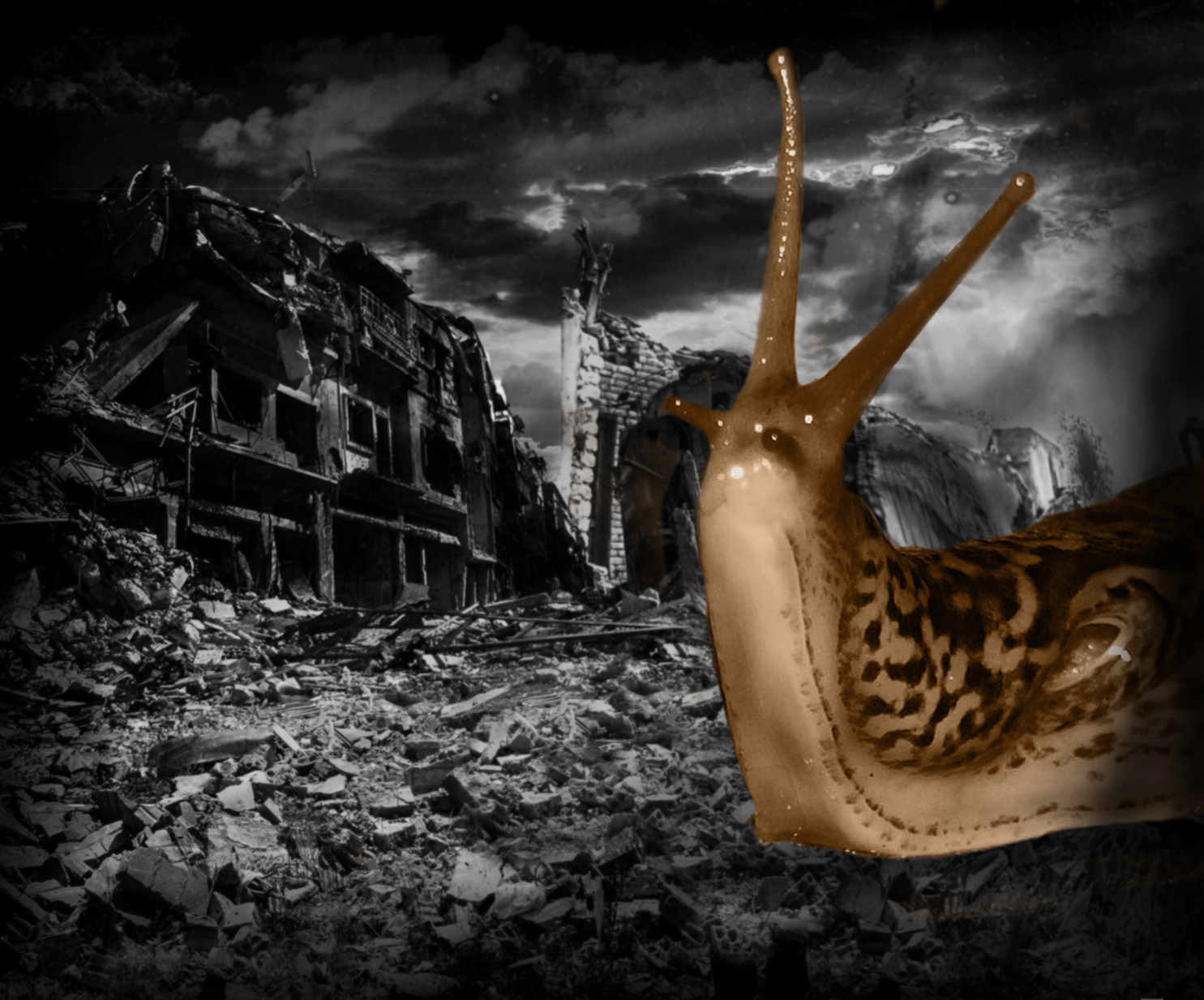 They roughly resemble Spanish garden slugs. Only, the smallest ones have the height of a five-story building and the length of a medium-sized city block. Eating their way through literally everything in their path, some of them grow large enough to compete with the skyscrapers on Manhattan and in Dubai.

No one really knew where they came from. Or actually, the blatantly obvious answer to that was, that as any alien invasion, they came from the sky above. One day the soggy beasts had simply fallen from the sky in a seemingly random distribution all over the Earth’s surface. Instead, the question that puzzled people was rather how or, even better, why they had come. There appeared to be no logic to their sudden appearance other than perhaps, something else putting them there. As far as anyone could tell they have no level of intelligence to speak about. Nothing that resembled any means of communication. Their attempt at world domination appeared to be a consequence of simply not understanding supply and demand, rather than the entitlement of believed superiority. Yet, on their way to world domination they were. At the price of all life, including their own.

Falling from the sky, they had materialised on all major continents roughly at the same time. Some had fallen into the oceans which witness accounts declared “drowned them”. That said, the impact had had a huge toll on some of the coastlines. For instance, one splash had caused a major tsunami with fish raining down all over the coast of Brazil and more impressively, smacking a great blue whale at the feet of Christ the Redeemer. Some called the slugs an act of God. Others the ultimate proof of Alien life.

As the ocean slugs were sent to their death and eaten as prey in the oceans, the slugs landing on land were the bigger concern for worry. With ridiculous speed they had immediately proceeded to reproduce and started to eat everything in their way: trees, buildings, forests and cities. Anyone who was in their way got swallowed up as well. It appeared as though nothing was undigestible for them. Country after country was being infested with the mega slugs who made it impossible to remain in their path and left nothing to cultivate behind them. The epidemic of the mega slugs was a new devil, not based on human mischief nor biological plagues. It was an enemy no one knew how to fight.

China and Russia had in joined forces proceeded to nuke the invaders, killing of a large part of the slugs right there and then. Naturally, it also destroyed everything else and made the area uninhabitable for all other forms of life as well. The temporary joy of killing off a few of the monsters had quickly subsided as a few survivors had been discovered at the border of uninhabitable locations.

The US, Europe and the Middle East had signed a temporary peace treaty and with a combination of tanks, air-force and plain footsoldiers they had managed to pushed the invasions back on three different locations: from Israel back into Egypt, from Mexico back into Guatemala and from Germany back into Poland. It was a lost battle to begin with. The slugs were too fast, too many and as they fed on their dead, their own casualties did little to discourage their advancement.

As it was proved that they could not survive in water, the cost of real estate on islands and boats skyrocketed. Island nations were suddenly facing a whole new level of immigration crisis. Japan, Cuba and Madagascar were some of the first places to take up weapons to stop the boats from mainland. The UK had taken up something that legally could be described as patriotic martial law and less legally as a desperate witch-hunt on illegal immigrants.

The numerous people arriving on gummy boats from France, The Netherlands and Belgium were greeted by marine border control that enforced their return. More disturbing was that there were regular reports on supposedly intentionally sunken ships. For those rare few that managed to arrive, long tedious waiting days in inhumane conditions at the customs was to be expected. Passport checks, ethnic evaluations of claimed British heritages continued and work justification questions persisted until most were shipped back to the mainland to face the unstoppable slaughter in the European Union. No longer members, the UK had every right to refuse the entry of Europeans without visas. And for the first time ever, the entire nation was in agreement: Brexit had been a pretty clever move.