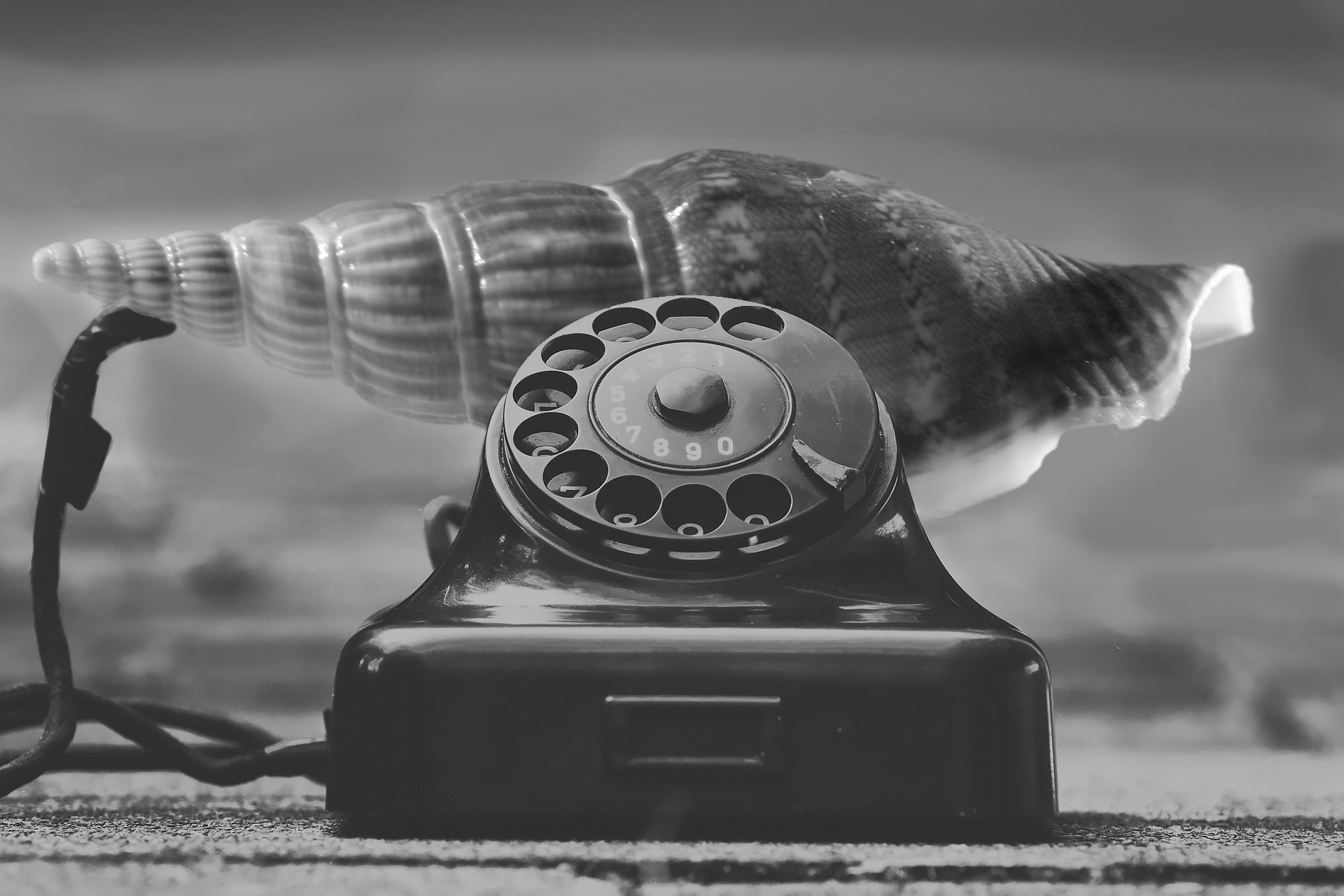 “Jackson residence,” Annabell answered with a cheerful tone as she picked up the seashell resting on the counter. “The lady of the house speaking.”

Standing in the light from one of the windows Annabell looked every bit as beautiful as she had in the 60s. Her skin hanging in ringlets around her eyes, her hair grey in flowing curves down to her shoulders, neatly pinned up on one side.

She was wearing a flowery dress with a wide skirt and a pair of pointy toe shoes that couldn’t have been comfortable in any decade. Her body was well over 70 but for the past 20 years, her mind had grown younger. Memories had been lost and her consciousness had become a master of fitting puzzle pieces that did not match. On rare occasion, it struck her that there was something wrong: looking in the mirror she sometimes realised that she looked too old and sometimes she saw her husband, Jack, for what he really was. These moments she became very frightened but usually, it took a few moments and just like that she was back in her delusion.

Despite the heartbreak he felt when it started, Jack did not mind that much anymore. He loved who she had been when they met and even though she no longer remembered all the years they spend together, in some sense, it was like being loved by the young Annabell all over again. A love that had died under all those years when time was just ticking. Seeing her as she once was elevated also his feelings for her. All those years emotionally apart had reverted into a late-life crush.

Sometimes Jack felt like maybe it was a bit inappropriate for his wife having the mental age of someone in their early 20s, far younger than their three children. But then he looked at her smiling at him like she had done all those years ago and he felt like maybe it was not so bad after all. Not to mention that it meant that she had forgotten everything about that…

Today he was watching her as she was having a phone conversation on a large seashell they had brought with them as a souvenir on one of their holidays to the beach.

If renewed love was the perk of Annabell’s deteriorating state of mind, this was the downside. As her memory left her so was her mental health in general. She had taken up a few strange habits throughout the last few years. Occasionally, rather than rarely, she put her handbag in the fridge, the milk in the shower and once Jack had found her scrubbing the floor with orange juice. When he had asked her why she was pouring breakfast juice on the floor she had said: “It smells so nice, Silly!” And as this was not an untruth, he could not find any reasonable arguments against it and had let her continue only to moments later clean it up after her.

Now he could see how she got more and more agitated while on the “phone”. In Annabell’s mind, she was clearly having a vivid conversation with someone through the decorative seashell. He wondered who it might be. It was not rare that Annabell used objects in unconventional, or blatantly wrong, ways. But he had never noticed that she heard voices or conjured up people who were not present.

“Bellie-dear!” he called for her. “Who is it on the… phone?” Annabell did not respond, but she turned to look at him with shock and despair.

Oh dear, Jack thought, something is very wrong. He rushed over to her as fast as his old man legs could carry him.

“It was… it was Josie, she told me… she told me everything.” Annabell’s voice was shivering, tears of anger and fear bubbled up in her face that he had not seen since the doctors had told them about her disease.

“Bellie. Bell. Annabell! Pull yourself together!” He said with increasing fear and frustration at the agitated state his wife was spiralling into.

“How could you…?” she continued and pushed him away and bolted for the kitchen. “How could you!?” she accused him once again. Jack had no choice but to let her go, following closely behind. “Stop following me! Leave me alone!” She slapped his face and momentarily defeated he remembered the previous time when exactly the same scenario had taken place.

That time Annabell had taken their then two children with her to live with her parents for a short time. He had pleaded with her, more out of shame than love. Annabell’s parents had been furious. Not at him, but rather at their daughter for putting them through so much shame. They had lied to their neighbours about why their daughter and grandchildren were back home with them. Claiming that they were renovating the house while Jack was working out of state for a bit. The neighbours had not believed them. Jack knew that much, but sometimes lies are told for the sake of pride, not for others to believed them. Jack who once been quite the expert on lies, was now living one. His wife trapped in a life already lived. He told himself that this lie was the only one he would never regret. But on more honest occasions, he was aware that that was probably as much of a lie to himself like the lies he told others.

A loud thud could be heard from the kitchen. “Annabell!” Jack shouted and ran in after her. She was lying on the kitchen floor, a cup of coffee still logged in her hand pouring out all over the floor.

“Annabell?” he asked again as he helped her sit up.

“Jack?” Annabell answered confused. “I must have fainted when I was bringing you a cup of coffee. I know how much it helps you with your work.” She told him as he helped her up on her feet, holding her tight. “How is the business coming along, dearest?”

“Don’t worry about it, darling.” He held her close. “I am taking a break. Maybe we can go out for ice cream to get your mind of things?” He took the cup from her hands and seeing that she could stand by herself, started to clean up the mess on the floor.

“Oh, bless you. You are such a selfless husband. Ice cream sounds wonderful.” She said smiling at him with all the love in the world. Then something Jack did not hear, took her attention. “But first I have to answer the phone.” She left the kitchen before he could stop her.

“Leave it!” he called after her, emotionally drained.

“Could be important!” she laughed at him with a crystal clear tone in her voice. “Jackson residence,” she answered into the seashell. “The lady of the house speaking. Oh, Josie! What a pleasure to hear from you again! But I am afraid I will have to call you back. Jack is taking a break from work to take me out for ice cream. Haha, right you are! Priorities!”