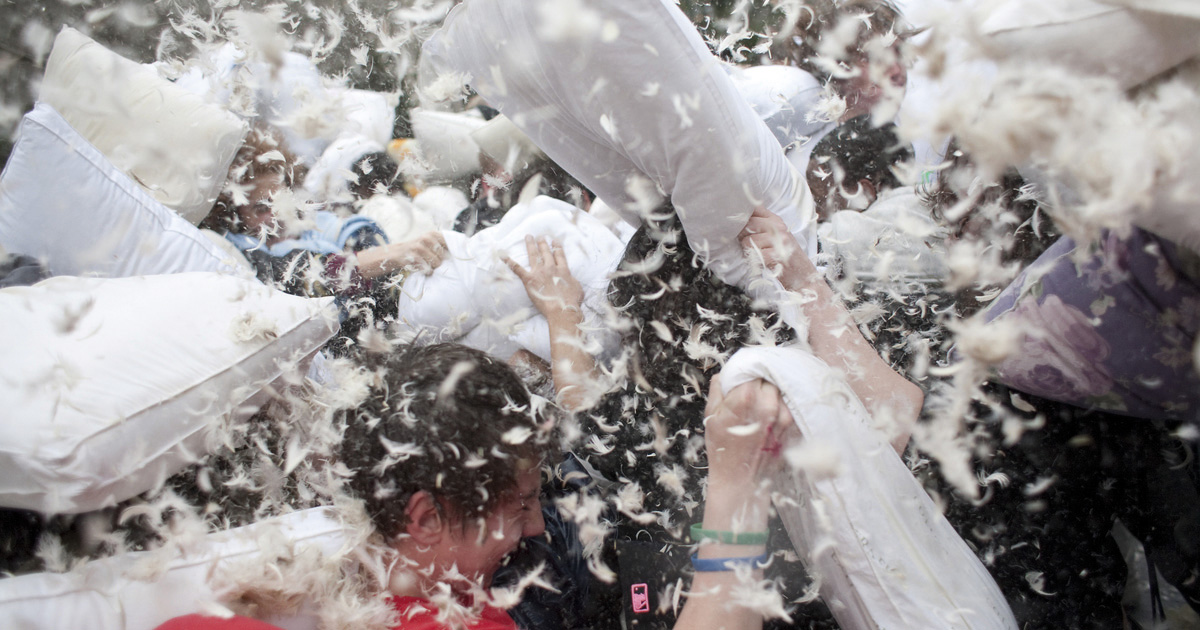 Armed with two 60 cm long green pillows, Bambi and myself walked through the tourist crowded streets of Barcelona. Fifteen minutes later feathers soared serenely in a “setting-sun”-atmosphere filled with battle cries, laughter and the numb sound of pillows-in-movement hitting their mark. Around us hundreds of people armed to the teeth with bedroom items, battled it out in a “dog-eat-dog” and “every man for himself”-scenario.

Despite a moment or two in fear of a mild concussion, it was mindblowingly liberating to be hitting nameless strangers who, like us, decided that getting smashed with other people’s drooled-on bed stuff, sounded like a good idea. In this situation of “encouraged violence” I found myself somewhat masochisticly regretful that the raging-thunder had already morphed into the more peaceful waiting-out-the-rain. Although, while a waste of outlet,  I am a firm believer that the more you fight, the more you lose. Now, paradoxically, I simply await my inner pacifist to execute a coup d’état. Still, every cloud has a silver lining and in moments like this a rainbow can be glimpsed at the horizon.

Now days later, to the soundtrack of Cigarettes After Sex, I am squeezed onto Bambi and Pandabear‘s balcony. Described, it can only be called “a Spanish French-balcony“, and for some reason the tiny alley-street below me, hit rush hour. Groups of old ladies, young trendy couples, a plenitude of bald heads and the sound of motorbikes both distracts and dictate my writing. I am in Barcelona for business (working together with an old friend whose sweet politeness makes me feel like a brute) but undeniably, with Barcelona pleasure always accompany.

Beyond Barcelona’s beauty, pleasure takes the profile of playing with Bambi as Pandabear is overseas. Evenings spent talking, teasing, touching, torturing, illuminate once again how fundamentally different we are; values, views, concerns and pleasures are often miles apart. Yet based on some elusive bidirectional personality trait, our life-attitude, the fighting-free-feeling, or some arbitrary aspect of cosmos, we simply match. (Maybe opposites do attract after all…?) She is a perfect example of a person I love and deeply admire, yet would not want to be very much like. Written, it reads almost like an insulting contradiction, but experienced, it feels like a self-“righteous” necessity. Maybe growing into one’s own skin is a sign for the peaceful reassurance found in an emerging rainbow.